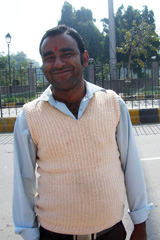 For taxi driver Suman
education is the key to success

Two weeks ago I attended the Catalyst summit in New Delhi, India, an exciting event bringing together about 150 international researchers working in the field of new approaches and solutions towards better education – especially in the field of mathematics, science and informatics. We all met in New Delhi, hosted by Hewlett Packard with a very inspiring conference programme. Many people predicted that this would be a very impressing week – due to the intense contrast in the way of living between India and Germay, due to the challenges India is facing, and last but not least due to the mix of educational research actions represented by the groups of delegates from the US, South Africa, Europe as well as Asia and Autralia. And they were right!

In a nutshell: education in India
Some figures about India: India has a population of 1.15 Billion people with an average age of 25 (representing 17,5 % of the worlds population); 55% are below 24 years, 109 million people will enter the »employable age« within the next five years. For a German these figures seem hardly believable. Living in a country where the notion of »demographic challenge« is in widespread use these days, such figures reveal completely different dimensions of educational challenges.

India is facing tremendous tasks in educational efforts especially in rural areas. The standard of living is still very different, and the chances to profit from higher education is still very much dependent on income, location, and the respective infrastructure. Post Secondary High Schools offer seats for 7% of the college-age population, and there is a high drop out rate: 42% drop out before class 5; only 15% reach high school, 35% of the population is illiterate. There are also severe gaps concerning teachers: 25% off all teaching positions are vacant, 57% college professors lack PHD or Master degrees. Nevertheless, the sheer scale effects already show their influence: 690,000 students of Science and Mathematics are graduating every year (in comparison to 530,000 in China, 350,000 in Japan, 420,000 in the US and 470,000 in the EU).

The answer: BEE – Bachelor of Energy and Enthusiasm
We learned about remarkable initiatives like the one from the Agastya Foundation which brings small buses containing physical and technical experiment equipment to rural areas in order to promote interest in learning and an understanding of the daily surroundings. These mobile labs are an inspiring and pragmatic answer to the poor infrastructure and have remarkable effects on the kid’s motivation and interest in education. The success of this work is also highly dependent on the willingness and commitment of the teachers. The founder of Agastya summed that up with the following notion: »Our teachers need a BEE: a Bachelor in Energy and Enthusiasm«.

Regarding the size of the country we also discussed intensively the potential of modern information and communication technology to support these educational efforts. Especially mobile phones are getting into the focus as they are the only widespread personal electronic device. But for me there was no convincing approach which provided answers to the question how modular content could fit in that format! The discussions in the researchers group showed that there is still a lot of work to do, in India and also in other countries.

India and Germany: Same, same but different
Yes, India is very different. However, there are also some very comparable approaches and convictions that determine the discussion in India and Germany. They have their origin in the basic challenges of the demographic structure which are very different, but the consequences are nevertheless comparable. These are

Education is key. On a very personal level, we perceived this in the discussion with our taxi driver Suman. A clever guy who drove us all around New and Old Delhi, with rather good English although he did not learn it at school. »I am just learning by doing«, he explained. And he is very good in that! Currently, he is teaching himself Japanese for the same reason: providing good service for his customers. His wife and two children live some 900 km away in the mountains, while he is earning the money in New Delhi. His parents were too poor to pay for his college education; he wants a different life for his kids. We are sure he will seize his chances.

Thanks to the HP Catalyst Initiative, especially Jeanette Weisschuh and Jim Vanides, for giving us the opportunity to learn that much – with all our senses.